my apology to federico cenci and a horseshoe!

i owe facebook friend federico cenci an apology, although to be fair he owes me dinner when i go to siena.  fede showed up in winnetka because he wanted to spend three weeks working on his dissertation about fritz leiber, my grandfather.  three weeks is a long time to hang around my house so one day i suggested that he think of someplace he’d like to go for a day trip.

“how about niagra falls?”  he suggested.   “can we go there this afternoon?”

“fede, america’s a lot bigger than you think.  niagra falls would be a good three hours by plane and. .. oh, fede, don’t worry.  we’ll go someplace else.  what’s your second choice?”

oh, dear.  i finally suggested that if we were going to someplace for the day he should choose something in illinois.

“springfield,” he said, in a hushed tone.

we started off at six in the morning, got there by midafternoon.  and saw the following sign:

he wanted to stand on the overpass and have me drive under it and take the picture.  i thought he was insane.  i couldn’t understand his fascination with our state capital until we saw a dunkin’ donuts.  he cried out “homer simpson!”

“fede, you understand that this is NOT the springfield of the simpsons,”  i said.  “every state has got a springfield.”

he looked at me–i had just revealed that there was no santa claus, no tooth fairy, no easter bunny.  i had forever destroyed an essential innocence.  sure, he was thirty two but it was a blow.

i offer up this photograph, taken just a half hour ago, as part of this mea culpa.  i was informed by face to facebook friend #37 steve rahn that this is indeed THE springfield.  in fact, look at the high school:

i drove to springfield to meet melissa coulter, f2fb friend #36.  she works at the illinois institute of continuing legal education.  three years ago, she helped me with a one time production of a play i wrote.  we lost touch, but i wish we were neighbors because she’s unbelievably cool.  we were at the westwinds lounge in springfield, a den of incredible taxidermy.

she told me that one must order the horseshoe.

a horseshoe is a burger with bread, meat, cheese and on top of that, french fries.  every restaurant in springfield has its own version and there’s not a piece of parsley or lettuce or any other green stuff to be found.  luckily, the westwind lounge where we dined was just four blocks from the memorial hospital which bills itself as “first in cardiac care”.  i’m feeling a bit, ahem, oversized. 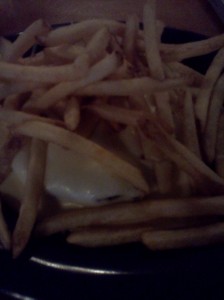 melissa was planning an evening with her husband–ethan, their four year old, is spending the night at his aunt’s house.  my recipe for a date night:

1.  a trip to victoria’s secret

3.  a bottle of champagne

next up:  i might have a recipe for a date night, but steve rahn’s got a recipe for a perfect horseshoe with bechamel sauce!  and what he’s taught me about surviving reversals of fortune. . . .

This entry was posted on Friday, February 11th, 2011 at 8:55 pm and tagged with facebook, horseshoes, melissa coulter, simpsons, springfield, steve rahn and posted in Uncategorized. You can follow any responses to this entry through the RSS 2.0 feed.
« how to stay out of the police blotter from my f2fb friend winnetka current
f2fb#37 steve rahn and the recipes for horseshoes and fortitude »

One response to “my apology to federico cenci and a horseshoe!”