sometimes i feel like such an insider! i get the chance to spill the beans on the upcoming programs at the winnetka northfield library AND i get my invitation to the royal wedding! but first. .. .

when i was growing up in the patrick family, mrs. patrick allowed me one pleasure that saved me: she let me go to the library once a week and pick out all the books i wanted. i had no friends. i was allowed no friends. i was not often given the chance to watch television. i spent far too much time in “timeout” in the basement. but i could read and the books i brought home from the library let me see a world and be raised in a world that had order and principle and a beginning, middle and end.

later, mrs. patrick would develop a paranoia that i was, among other things, jewish. this led her to forbid me from reading any books about jews, israel, most of world war 2 history, etc. the paranoia began spreading until, of all things, i was in sixth grade confined to reading sports biographies. i have forgotten more than most people know about babe didrickson, stan mikita and lou gehrig.

my facebook friends erin maassen and bronwyn parhad have dream jobs. mrs. parhad runs the children’s library and i cannot bring myself to call her bronwyn too easily because mrs. parhad is what i told my sons they had to call her. she is in charge of mommy and me reading circles and crafts programs, chess clubs and book adventures. today she was reading to the two year olds about butterflies!

erin maassen has a background in marketing and she thought she’d end up in advertising or public relations–and she puts together the catalog for the library’s programs. she gave me a sneak peek!!! so on my calendar i have added:

1. a mini-golf tournament at the northfield location from six to eight p.m. how cool to play a few holes throughout the library the day after the masters tournament! i’ve already registered, and you have to as well if you want to get a tee time.

2. a green spa day on april 16th to create your own natural, eco-friendly spa products. i’m going to find someone to go in my place, make the products and give them to me. i wonder what friends i have that are so selfless?

and my favorite, a royal invitation:

3. a royal wedding street party at three p.m. on saturday april 30. we’ll be making royal wedding hats, read a story and toast the happy couple! the catalog says that it’s a family event. i wonder where i’m going to rent one of those–just a few kids would do, i imagine. and now i have to find an appropriate hat and frock!

for further information on the new spring programs, go to winnetkalibrary.org and in the meantime, thank you erin and mrs. parhad for a lovely preview! 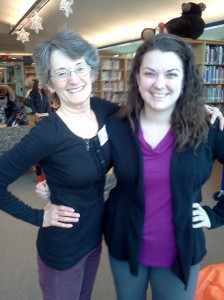 i am booking the mexico city and houston trip and new york is up next week. this is such a wonderful adventure. easy for me to say because i’m not presently being thrown from a plane with a flimsy piece of nylon!

This entry was posted on Wednesday, February 16th, 2011 at 10:05 pm and tagged with bronwyn parhad, erin maasen, facebook, royal wedding, winnetka northfield public library and posted in Uncategorized. You can follow any responses to this entry through the RSS 2.0 feed.
« f2fb preparations for being tossed from a plane
he’s not my facebook friend, but thank you mr. biddle »