gilbert gottfried you’re supposed to be my friend. we bonded on facebook, didn’t we? well, i’m in new york and you’re in new york and for some reason we ain’t connecting. i think it’s because you’re a celebrity. you too, glen thater. but i did discover something about one of my celebrity friends, the rap artist inda loop. . . . it was while i was with mop after viewing the museum of sex–

people play with facebook and play with gadgets in order to express themselves. and it’s changed lots of people’s lives in unexpected ways. i used to write books, mostly romance novels, and now i’m not sure what i do because books are different. one of the first to see that books would be different is my friend richard curtis. he’s an agent in new york and continues to sell my grandfather’s works even though my grandfather fritz has been dead for almost twenty years. when i first met richard he told me about books that wouldn’t be printed on paper. i thought he was really crazy.

i walked from one end of manhattan to the other yesterday because i didn’t realize just how big of a place it was. i wish that richard curtis could create books that communicate smell–you’re walking down the street and the most expensive perfume mixes with rotting garbage and exhaust. i met one man and bought his grocery cart and all his glass and cans. then i gave them back to him because i ain’t never getting on a plane with ’em. 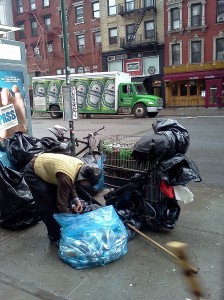 and i talked with some dudes from nigeria who were protesting in front of the consulate. i really hope the naija boys are not involved in this stuff because i do love their music.

i saw a lot of hair salons, like every third store–if everybody in new york were like me the place would go broke. i haven’t gotten my hair cut in four years. at the end of the day i went to ted baker just a mere forty four blocks from the hotel where i’m staying. i wanted to see baba. baba (f2fb#56) used to be in winnetka, he’s originally from japan, and he has a job in retail and is finishing up a stint at starbucks. i was a little tired. . . .

i find new york overwhelming. it’s about as organized as a city can be if it was originally created by handing a kindergarten classroom a book on urban planning and a box of crayons. i am hoping to see my favorite facebook friend and one of the five great loves of my life joseph presser later today. it’s about the only thing that can get me to leave my hotel room which i have now decided is “safe”.

in the meantime, gilbert gottfried, would you please get in touch?

This entry was posted on Saturday, February 26th, 2011 at 2:59 pm and tagged with facebook, friends, gilbert gottfried, inda loop, new york and posted in Uncategorized. You can follow any responses to this entry through the RSS 2.0 feed.
« the museum of sex . . . and an invitation
i could have been on tmz.com! »