the origin of the world and other paintings. . ..

i think this project would make a beautiful movable museum exhibit, with each facebook friend celebrated and presented in their incredible unique way. fadel haowat-halliwell, f2fb #66 already has his materials ready. from the outside, he looks like the perfectly average chicago twentysomething: he works at a lincoln park coffee shop, he just switched his major from chemistry to math, he lives with his parents and sister and pet parrot, and he carries his life in his backpack.

but fadel is also a seeker. of faith. of love. of love and sexual fulfillment together in one special person. he is an artist and a feminist in a way that i have never experienced a man to be.

yesterday he showed me a series of pictures that i think must be seen by the world. i must find a curator for him.

at first i thought the picture above was a watermelon, but it is not. it is a picture of the source of life. it reminds me of “the origin of the world” by gustave courbet. fadel calls the picture “fertility”.

the second picture he showed me is called “the economy” and you have to look closely to realize it’s really about how the world makes money off of women and enslaves women. the skycrapers are decidedly male, with penises at their core. the only escape, within his vision, is a pirate ship.

the last in his series on women is religion. fadel was raised greek orthodox and briefly committed himself to being a muslim. but he has yet to find the true peace of faith fulfilled. in this picture, he emphasizes how religion has trod on women but he makes a larger point about the dynamics of different religions. you can’t see it but this is an artist who does not complete his work at the end of the canvas–instead the painting continues around the canvas. it’s really remarkable and a picture does it scarce justice.

i was startled that he had prepared for me a portrait. this is me having coffee with a vagina at the artopolis coffee shop. it is now on my living room mantle directly under a portrait of queen victoria. 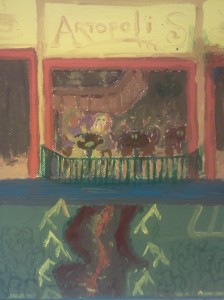 fadel is a seeker and so am i. we’ve made plans to visit a few services together and to continue the discussion of faith and what’s important. i also hope one day to see his paintings in a museum. perhaps the museum of sex in new york.

next up: i meet a real hero, facebook friend jeffrey weber

This entry was posted on Tuesday, March 8th, 2011 at 4:14 pm and tagged with art, courbet, facebook, fadel haowat-halliwell, friendship and posted in Uncategorized. You can follow any responses to this entry through the RSS 2.0 feed.
« thank you mr. clark (or maybe mr. jones)
slap some old spice on this man and tell isiah mustafa he’s out of a job! »