it wasn’t at all like the movie “my dinner with andre”. .. 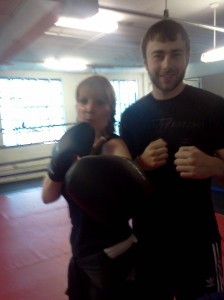 no, this had been billed to me as like “million dollar baby” but without the c-1 and c-2 neck injuries. and there would be a dwarf. i was very concerned about boxing with a dwarf. made me think about that rule about hitting below the belt.

i ended up boxing with andre, a ukrainian dude who probably was a bit baffled at being asked to train me and another, ahem, woman of a certain age. here’s my f2fb friend #90 sally
graver.

in any event, andre gave us quite a workout. i’m beginning to think boxing might actually require a) some quick physical and mental reflexes and b) incredible courage. neither of which i particularly have. okay, the dwarf. i’ll get to the dwarf.

andre worked us for twenty minutes–jump ropes, punching, running, hopping–and i was quite ready to say “thank you very much” and head out for a latte and a light pastry. instead, we were just beginning. here’s my first title match in the ring.

look at me go all fast and furious on him!

okay, the dwarf. i’m getting there. what i noticed is that i work out every day. i run or walk, or weights. i can do an hour on a stairmaster reading magazines that keep me up to date on reality television stars that i don’t even know–like, who the hell is leah messer? why is she having problems with her baby daddy? working out has not made one bit of difference in keeping the weight off or in making me all sleek and buff. but damn, twenty minutes with andre and a bit of ring time. . . .

and sally was pretty damn good too!

sally has a son david who is a dwarf. having a child always has an element of surprise to it and sally describes her experience as a little like getting on a plane bound for ciampino airport in rome and finding yourself landing in amsterdam. i first met sally when david was still in high school–i organized a birthday party at rotary for him and i didn’t actually get to go to it. but he got his first job from one of the rotary members at the party who was head of the park district. david kept score at youth basketball games. but now he works as security at ultimate fitness boxing club–he was guarding the front desk while us gals were tearing up the joint.

sally is more than just a tough athlete. she told me to remember that having the map is not the same as knowing the terrain. i don’t think she was just talking about the fact that i got lost on my way to the boxing club! thank you sally!