this man has a certain charm . . . on my bracelet

if your house catches on fire, i’m sure it will be of great comfort to know that i am a first responder.  . . . if you live in kearney, missouri, that is.  fire chief larry e. pratt swore me in just before i cleared out of town–taking my tornadoes and thunderstorms with me to illinois.

larry pratt has devoted his entire life to service in kearney.  his father before him and his sons after him have been part of the police and fire departments–and larry is a keen preserver of kearney history.  i wrote a history of kearney and larry made my job so much easier that my able assistant made a charm out of a picture of me and larry at the firehouse. 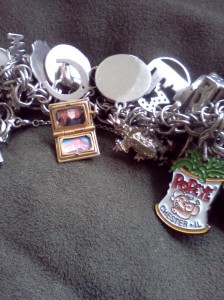 i leave kearney realizing that i have yet to meet a rude person while there.  i mean, there’s a lot of cities, i won’t name any except for one that goes by the initials of new york, where you can easily find someone who will cut you off in traffic, tell you to commit abominable acts upon your own person, or budge ahead in line at the deli–but you can’t find those people in kearney.  that’s what i love about the place.  i think kearney is what i would like for my family or as my home.

i just have to work on that teleportation system so i can be a first responder!

This entry was posted on Tuesday, May 31st, 2011 at 8:41 pm and tagged with facebook, fire chief, friendship, jesse james birthplace, kearney, kearney missouri, larry pratt and posted in Uncategorized. You can follow any responses to this entry through the RSS 2.0 feed.
« i receive a laying on of hands and prayers in kearney, missouri
sandra bullock’s doppelganger »