angels show up all the time and i don’t even think they are full time.  maybe it’s a part time gig.  i’ll have to ask my f2fb friend #184 rebecca cohen when i see her next.  like “what are your hours?”  this is important because i met not one but three angels in the grand food store last week.

it was a rough time.  i had returned from los angeles and san diego and while i had wonderful meet ups with f2fb friends balbinka, josh and brian, i had been awfully confused by my interaction with f2fb friend #180 andru and one facebook friend blew me off altogether.  i returned home on my birthday and my house was pretty destroyed by a flash flood.  and i thought everybody has forgotten my birthday, which isn’t any better when you’re fifty one than it is when you are five.

so i was in the grand food store.  crying in aisle five.  that’s when the angel appeared.  the first one.  that would be rebecca who is known by most people as becky but she says she’s old enough to be called rebecca now.  she put her arms around me, told me everything was going to be all right and somehow i believed her.  she then invited me to dinner.  i don’t recall a single instance of angels inviting people to dinner in the bible.  but there was that part in genesis eighteen where abraham was visited by three angels. 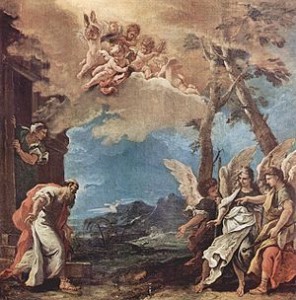 this is what f2fb friends rebecca cohen and larry barkley look like (with lynn sanders who is also my facebook friend whom i will be seeing soon!)

then facebook friend lynn sanders and f2fb friend #83 larry barkley told me to buck up.  and i did.  then i went to dinner at the cohen house.  sometimes all it takes is a friend being good to you to make all the other stuff disappear.

most houses in winnetka have polished lawns and hostas, but becky cultivates native prairie plants

we had a lovely dinner with her husband jeff and two of her three children.  after dinner, we were talking and she reminded me of something i had forgotten about her first husband.

i was put up for adoption when i was just shy of my third birthday.  recently i came across my adoption certificate.  it was laying on top of some papers in my safety deposit box and i was surprised because i don’t recall ever seeing it before.   i wonder what angel put it there.

when i think about my adoption and becky’s husband’s adoption, i wonder if we share a strangeness, an inability to form good relationships.  or maybe rebecca was anunciating (announcing) that it’s possible with great effort or grace.  or maybe you just get older.  but you definitely don’t have to cry about it in the grocery store all by your lonesome!

This entry was posted on Sunday, July 31st, 2011 at 4:36 pm and tagged with adoption, angels, anunciation, facebook, rebecca cohen and posted in Uncategorized. You can follow any responses to this entry through the RSS 2.0 feed.
« no, i won’t explain about the lost bikini
santa cruz loses its guardian angel and i take a step backwards »