sisters, sisters, there were never such devoted sisters! 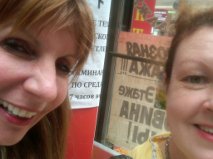 ever since i laid eyes on f2fb friend #316 carolyn quinn, i can’t get the rosemary clooney song “sisters” out of my head. download it on itunes. it will stick with you.
“sisters, sisters
there were never such devoted sisters
never had to have a chaperone, no sir
im here to keep my eye on her
caring, sharing
every little thing that we are wearing
when a certain gentleman arrived from Rome
she wore the dress and i stayed home!”

i was way nervous meeting f2fb friend #316 carolyn quinn because i had to learn to negotiate new york public transportation.  there are many native new yorkers, bernie goetz among them, who don’t even bother.  it’s confusing, the staff are somewhat distant, and mapquest had been as cryptic as a psychic at a state fair.

one of the trains i took from my brooklyn hotel included a memento mori — a graveyard city to remind me where my ultimate destination is!

but i got where i was supposed to go!  coney island, although i couldn’t get in because we were two weeks from when the park is open on weekdays.  instead, it was being rented out by a hasidic boys’ school.  i wondereded if perhaps i could cut my hair, leaving forelocks and fool them into thinking i was twelve years old. . . .

carolyn and i are really sisters.  we’re just a year apart (she’s fifty, i’m fifty one)  and we both are enhanced redheads.  we both love theater.  we watch the same television shows.  we have some of the same struggles with our families.  we ate restaurant in brighton beach and the menu was in russian.  boy, was i surprised at what i had for lunch and i’m still not quite sure what it was!  then we got our nails done together and i felt quite thirteen.  ATTENTION COWORKERS OF CAROLYN:  that really is glitter on her finger tips!

then we wandered around, whiling away the hours.  i was on the lookout for neil simon researching a new play. . . . but alas, the closest i came was some guy who stopped me to talk for a full minute and a half until he paused with a horrified look on his face.  he had realized i don’t speak russian.  it had just dawned on me that he wasn’t just talking with a new york accent.  we moved on.

carolyn witnessed the 911 attacks from a tower just a mile away.  she has not been on a plane since.  she is skittish as are many new yorkers.  but i have asked her to set aside her fears as i have done this past year:  and she has promised me she’s coming to chicago.

one important aspect of my new years resolution to meet all my facebook friends was to find out exactly who they were, to get out from behind the laptop screen, to really see them face to face.  not just facebook to facebook.  i came to this part of new york expecting to meet a friend.  but now i’ve met a sis. . . oh, damn, i’m hearing that song again!

isn’t it neat how carolyn took her on the computer, on the facebook page friends and turned them into people she knows!?  i think it’s adorable!  now i have to go play a whole bunch of heavy metal on my shuffle as i negotiate the new york transit to get to manhattan from brooklyn.  wish me luck!

This entry was posted on Tuesday, May 8th, 2012 at 1:08 pm and tagged with brighton beach, facebook, friendship, memento mori, new york transit, rosemary clooney, sisters and posted in Uncategorized. You can follow any responses to this entry through the RSS 2.0 feed.
« am i ready for new york?
how to (finally) make money off facebook! »

14 responses to “sisters, sisters, there were never such devoted sisters!”