the angels and demons in my bedroom

it’s every single morning before i even open up my eyes.  the angel i always imagine to be sitting on the window sill.  the demon lounging in bed next to me smoking a brimstone cigarette. 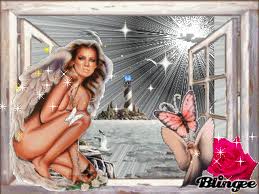 my personal angel doesn’t actually look like this. maybe yours does.  angels exist in the muslim, christian and jewish traditions but are ordinarily depicted as males.  is this picture a blow for feminism?

the angel was particularly adamant this morning:  i have finished revising the book about my facebook adventures of 2011 and had sent it to my editor at tate publishing.  but i need to sort through thirty to fifty photographic images to include in the book.  i had sold yet another book to tate yesterday.  oh, and facebook — yes, but not actually mark zuckerberg himself — had contacted me to find out if they could do a story about me.  it was a good day yesterday and included other blessings:  a friend had been nice to me, it was sunny and warm outside, the coffee was good.  and so the angel asks of me the same thing as every morning:  get out of bed.

the demon, meanwhile, has other things on his mind.

you’re fat, you’re old, you drink too much, you have a social life that is largely conducted on facebook, you’re irrelevant, you could die today and nobody would notice so why don’t you stay in bed and watch korean soap operas on hulu.com? says the demon

for a number of mornings, the demon has been very persuasive.  and i’ve watched eight episodes of season one and four of season two of faith about a korean protector of the king who travels through time to find a twenty first century doctor to save the life of the queen and then the surgeon . . . . oh, forget it.

today the angel won.  but only after an hour’s battle while i tried to go back to sleep.  the battle occurs every morning and it’s sort of the same for other people i’ve been finding.   my friends describe the enormous effort it takes to get it together every morning.

yesterday was a good day for angels watching over the facebook enterprise.  after opening at a stock price of $38 months ago, the company has lost half its value, closing at less than twenty dollars per share at one point.  the demons definitely were feeling pretty sure of themselves.  but this past wednesday, prices shot up an astonishing 19% to close at $23.  i betcha this morning when mark zuckerberg’s angels and demons were discussing whether mark should get up or declare a sick day, his angel had something wonderful on his side to motivate him.

do you have a conversation between demons and angels in your head?  is it mostly in the morning, like me?

This entry was posted on Thursday, October 25th, 2012 at 5:11 pm and tagged with angels, demons, depression, facebook, failure, friendship and posted in Uncategorized. You can follow any responses to this entry through the RSS 2.0 feed.
« even without the red shoes, there’s nothing like it!
denzel and sandy take away my flight mojo »

12 responses to “the angels and demons in my bedroom”