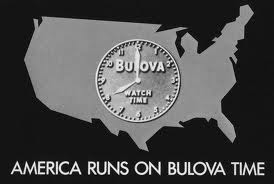 in 1941, the watch company bulova paid $9 to air a commercial just before a brooklyn dodgers philadelphia phillies baseball game. the ad was nothing more than this picture with some voice over.  some people who saw this first commercial weren’t interested in buying watches.  wasted advertising dollars.

this morning, when i logged on to facebook i read some ads on the right margin of my home page.  pottery barn.  a new opi gel nail varnish.  christian singles date.  faithful men looking to date mature women.  ameritrade.  a new anti-aging regime.  bone density tests. i have a sense that if i logged onto my son eastman’s account, there would strikingly different ads.   and if he logged onto my account, there would be a lot of wasted advertising dollars.  because he’s a twenty year old dude.  he doesn’t want to date faithful christian men, open an ameritrade account, or get his bones tested.  and frankly, what does he need anti-aging for when he still has to use a fake i.d. to buy liquor?

advertising is an inexact sport.

ever since facebook went public in may 2012, the shroud of pessimism has fallen over its menlo park headquarters.

the shroud of turin is a piece of linen kept at that italian town’s cathedral of saint john the baptist. it bears the image of a man who has injuries consistent with being crucified. some people think it was the burial shroud of jesus. the shroud of pessimism is when everybody thinks you’ve got nails in your hands and feet and you’re dying in between two thieves.

share prices on that first day were over $38 but the price has been bumping and tumbling ever since.  part of the problem is how to monetize facebook.

say what?  you’ve been hearing about how mark is a multi-trillionaire.  but yes, facebook actually has had a bit of a “what are we doing here and how do we make money doing it?” problem.

it’s about advertisers and how much they’re going to be willing to pay for playing on facebook.  when mark first started facebook, it seemed like the easiest thing in the world would be to allow banner ads–users clicked on the image, were redirected to the advertiser’s website, and for each click the advertiser would kick back money.  mark didn’t want to do that.  he wanted interactivity:  customers expressing interest, encouraged to give word of mouth marketing on a massive scale, and advertisers able to respond to the market with customer driven innovations.

today’s closing share price for facebook is $27.40.  a bit of a tumble from $38 but i think the long term prospects are good.  if i wasn’t paying my taxes this weekend, i’d definitely be down for some facebook stocks. . . and maybe a bulova.  because that first television commercial is making me feel quite nostalgic.

This entry was posted on Saturday, April 13th, 2013 at 5:16 pm and tagged with advertising, bulova, facebook, pessimism, shroud of turin, skittles and posted in Uncategorized. You can follow any responses to this entry through the RSS 2.0 feed.
« home sweet facebook home
saturday superhero facebook friends »