are you shallow and insecure?  egocentric?  imbued with a false sense of your importance and popularity?  maybe even, well let’s be fair, a jerk?  okay, the clinic term is narcissist and it’s a disease that is so tragic and profound that it doesn’t even have a celebrity spokesperson. 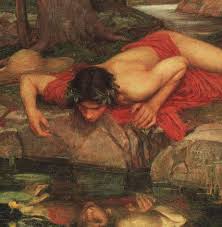 narcissus was a mythological greek dude who fell in love with his reflection in a lake and died because he just couldn’t tear himself away from the beautiful sight. narcissism is a catch all psychological term for anybody who thinks to highly of themselves.  narcissism also refers to the personality disorder of any one of your exes.

the university of michigan has released a study that concludes that social media sites like twitter and facebook draw in narcissists who want to bolster their fragile egos, control everybody’s great opinion of them, and post about what they are having for dinner.  study director elliot panek says that young narcissists opt for twitter while middle aged narcissists (a.k.a. jerks) use facebook.

“young people overvaluate the importance of their opinion,” he says.  “through twitter, they’re trying to broaden their social circles and broadcast their views about a wide range of topics and issues.”

mr panek, there’s ovulate, there’s overvalue, there’s evaluate. unfortunately, there is no :”overvaluate” unless, of course, you have overvalued your . . . oh, never mind.

“it’s about curating your own image, how you are seen, and also checking on how others respond to this image,” said panek. “middle-aged adults usually have already formed their social selves and they use social media to gain approval from those who are already in their social circles.”

okay, well, glad we cleared all this up for everybody.  young narcissists and middle aged narcissists . . . we gotta ask. . .

me?  i’m on facebook, i’m middle aged, i’m willing to entertain all diagnoses.

just in case you’re curious–as near as i can figure out elliot panek is a linkedin social media user.  wonder what that means?

This entry was posted on Wednesday, June 12th, 2013 at 8:12 pm and tagged with elliot panek, facebook, narcissism, narcissists, overvaluate, overvaluation, overvalue, social media, twitter, university of michigan and posted in Uncategorized. You can follow any responses to this entry through the RSS 2.0 feed.
« shameless selfie fierce?
cherries in the snow »

4 responses to “narcissism and me”