my superhero went home to daddy

when i visited ashton at cincinnati, he had a favorite friend isaac. both boys are superheroes.

ashton was diagnosed in a particularly horrific fashion. he and his mother were going to his sisters confirmation. ashton and erin were going to stay overnight with me but ended up in the hospital because ashton had an ear infection. the doctors figured out he had cancer. i’m sure i would have broken down a dozen times if i were erin but she has become the strongest woman i know.

ashton’s father passed a number of years ago and so i would like to believe that he will be there to greet ashton in the city of remembrance that exists. 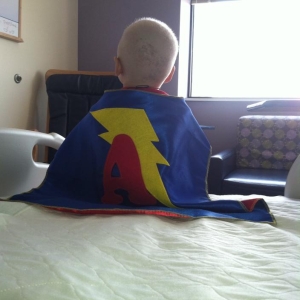 This entry was posted on Wednesday, November 12th, 2014 at 6:32 pm and tagged with ashton carley, ashton's army, cancer, death, gratitude, grief, jeffrey hunter, remembrance, steve goldman and posted in Uncategorized. You can follow any responses to this entry through the RSS 2.0 feed.
« sutton lee seymour
maybe i will buy you that life insurance. . . . »

7 responses to “my superhero went home to daddy”