please don’t feed the elephant before we get on the plane!

when i left manila, i was astonished at the wealth disparity.  across from my hotel room window was a river and across the river, a town made of buildings that were constructed in the most creative ways:  strips of tru-link fencing, corrugated steel, bed linens, plywood.  as i approached the water’s edge to get a better picture, a security guard (policeman?) advised me to not do that.  there were others living on “my” side of the river.  but the guard didn’t stop me, instead he watched over me.  if pictures are worth a thousand words, this is but a few.  the memories are going to stick with me.

this isn’t to say that life is not good for some residents. i saw kids playing basketball and a man offered me a ferry ride but he might have been asking me to go fishing with him!

on the other side of the hotel was my son’s joseph view–a manila business district to rival new york, london, or chicago.  we left the hotel and made for the airport.

i wanted to take this bus to the airport but my son joseph insisted on a cab. kids are no darn fun these days!

we first flew to malaysia and then into mumbai well past midnight.  i was exhausted, but first we had to go through immigration, customs, a security check, and then joseph got shook down for “tips” from two gentleman who gave us directions to our cab and who took his backpack.  at the airport, the cab was checked for explosives and our bags went through a conveyor belt.  our bodies were wanded and then inside the lobby our passports were taken for an additional scanning.  i think india is at war and just doesn’t want to admit to it.
i met f2fb friend #234 anto prashanth and #235 rahul guru when they worked for taskseveryday.com which is an outsourcing company in mumbai.  i wanted to devise a website.  it didn’t work for me and i ran out of money but i did end up with two friends.  unfortunately, rahul was unable to get a day off to see me and i got the impression that the american way of having paid days off and sick days and whatnot just doesn’t cut it here.  rahul sent anto as his emissary.  anto met me and joseph at the hilton mumbai where we were staying.  i picked the hotel because it was the closest t the airport and i recognized the name “hilton”. 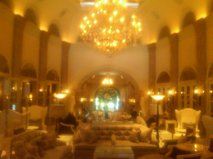 the hilton mumbai is so fancy i felt like the romanovs had added an extra princess: tatiana, olga,maria, anastasia, and now arlynn! 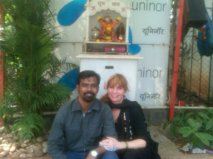 if you didn't get to take an elephant or a tiara back from india, would you settle for anto prashanth?

anto asked me if i wanted a souvenir from india.  i told him that memories are the souvenirs i like to take with me, but that i wanted an elephant.  something to ride in winnetka that would tower above the landrovers and the escalades.  later, i fell asleep,  part of the forty eight hour circadian cycle.  i didn’t know this but anto went out and bought a wood elephant for me to take back a little bit of india to winnetka.
i hope anto and rahul (and anto’s wife, of course) will come visit me next in chicago!  both anto and rahul work in american oriented companies that do work that one might call “outsourcing”.  they are our new middle class.  so they will have the wherewithal someday, if not now, to travel to exotic places like chicago and winnetka!