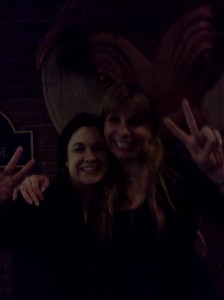 yesterday morning, i decided that i would just get in the car.  do that.  get that far in the process.  so i got in my car.  i felt extremely silly because the garage door was closed.  i thought, all right, i’m not making a commitment to leave.  i’ll just open the garage door.

then mr. radnor my neighbor was out there.  standing in the driveway.  what if he wanted to talk?  argh.  i decided to drive out to the street.  just that far.  suddenly, i found myself on the highway.  and then. . . in crawfordsville, indiana, there’s the beef house.  it’s quite famous in a family restaurant big portions wholesome atmosphere way. my waitress was jessica, a new facebook friend who is a mom i admire.  she works six days a week, consistently picking up an extra day shift because the economy is so bad.  she’s putting her son in a private school this coming year.  she’s determined to do right by her kids.  i admire that.  i know that in a few years they’ll be grown and she’ll be in the position i’m in–able to travel and meet with facebook friends.

today i met f2fb friend #108 laura resnick.  we were writing buddies, both of us working for harlequin and silhouette.  she’s a way better writer than i am and she’s moved into the fantasy field.  we haven’t seen each other in more than ten years. we met at the cincinnati art museum.  i didn’t know that cincinnati was once named porkopolis, way back in the early eighteenth century.  i think the name cincinnati suits the place better, although the residents have taken a flying pig as their unofficial mascot.  there are flying pig statues all over the place.  and there’s a flying pig marathon the first sunday in may.

as we entered the museum, she gave me one of her books–

the book is the third in her series about esther diamond, an actress who deals with the supernatural in the form of zombies, angry spirits, sorcerers.  like twilight but cooler.  she promised me that i get to be in her next book. . . . she calls it tuckerizing.  i’m not sure where the term comes from.

next up–i go to roxy’s for fish tacos and beer!

This entry was posted on Wednesday, April 27th, 2011 at 7:55 pm and posted in Uncategorized. You can follow any responses to this entry through the RSS 2.0 feed.
« f2fb friend #107 has her own intentions about the year. . .
the playground for adults who want to just be themselves »

3 responses to “the beef house, porkopolis, and unsympathetic magic”