you can’t possibly be an agoraphobic, judy says to me 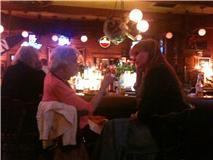 judy and i have known each other since the early 1990s when my two sons did children’s theater.  you haven’t lived until you’ve seen a production of guys and dolls performed by fourth through eighth graders.  and judy was (and still is) on the board of the winnetka children’s theater.  i was a stage mom.  judy was at one point involved in three different theater companies while working and raising her children.

this prime time woman is fearless.  for instance, she has gotten up onstage two years in a row in winnetka’s village follies benefit show as a, ahem, cougar.  she vamps, she sings, she acts, she dances. but claims she can’t dance anymore.  she can do anything she sets her mind to.

judy has had several incarnations.  she was a medical technologist, an antiques shop owner, a realtor, and she’s a lifelong sailor.  on most wednesday evenings, judy can be found at hackney’s restaurant and while i was dining with her, several people came to pay their respects and get a little love from her.   i felt like our new mayor rahm emmanuel could learn from her the exact way to deal with the populace.

and i’m thinking maybe agoraphobia isn’t the correct term for me.  agoraphobia comes from the greek words agora (place of assembly in a city state, or the marketplace) and phobia (fear).  it tends to describe people who get panic attacks when they are out and about and then the anticipation of a panic attack causes them to avoid being out and about.  until they finally learn to shut themselves up in their homes and put out the white flag.

maybe a better term is panophobia.  fear of everything.  everything would just about sum it up.

this morning, i’m feeling way better.  and i have to because i am going to see a special facebook friend who is battling back from a stroke.  she is learning to walk–and i want to be at my most helpful.

This entry was posted on Thursday, May 12th, 2011 at 4:23 pm and tagged with agoraphobia, community theater, dexilant, facebook, friendship, hackney's, panophobia, rahm emmanuel and posted in Uncategorized. You can follow any responses to this entry through the RSS 2.0 feed.
« God is startled to hear from my dad
grow or blow, relationship advice from tony »

2 responses to “you can’t possibly be an agoraphobic, judy says to me”