a little loco and less than five degrees away from . . . everybody on facebook!

a newly released facebook study claims that we are only 4.74 degrees of separation from any other person who uses facebook.  and if you’re looking for a stranger who is from the same country, that separation drops to three people.  so that means that i am one friend away from a friend of kevin bacon.

a game called six degrees of separation from kevin bacon establishes the links between every person in the movie industry to bacon. the game was invented at albright college by bored students in a pre-facebook era.

after thanksgiving dinner, i met f2fb friend #263 macon foscue the 4th.  he buys and sells precious metals as ceo of chicago precious metals.  in this time of economic crash and burn, he thinks precious metals are a great investment.  if i had enough money, i would buy gold and silver.  possibly at tiffany’s. 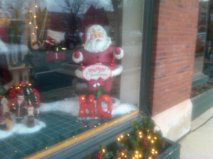 why does santa only say ho? i thought he was supposed to say ho ho ho! is it that santa is trying to cut corners on his vocabulary? or is it more tawdry than that? all the christmas stuff in store windows are reminding me that i have only a few short weeks to visit the remaining facebook friends on my list.

the next day i met up with friends #264 vijay sarthy and #265 don graf.  the two men have been friends ever since vijay–an opthamologist by day–auditioned for the village follies, a fundraiser variety show put on every year at the winnetka community house.  and during the summer, the two men are part of a group that keeps a standing golf appointment from memorial day weekend to labor day.  as part of my f2fb project, i’m going to audition for the show as well.  i might have to take something a bit bracing before i put on those dancing shoes.

i know vijay because he is the stepfather of f2fb friend #25 max henderson.  max is my older son joseph’s best friend and max stayed with us the day that his father colvin succumbed to cancer.  i have not spent a lot of time with vijay and i was charmed by his quick wit.  i know don mostly through other friends.  don is a dj for soirees at various north shore hot spots.  we spent some time reminiscing and trading stories about mutual friends.

as we were about to part,don said that even though we didn’t know each other very well, he had a present from him and vijay.

special golf balls just for me!!!!

i had to ask them about their game.  i was surprised by their response.

This entry was posted on Sunday, November 27th, 2011 at 10:33 pm and tagged with don graf, f2fb, facebook, golf, kevin bacon, macon foscue, six degrees of separation, vijay sarthy and posted in Uncategorized. You can follow any responses to this entry through the RSS 2.0 feed.
« you’re invited! to a pity party! in fact, you can just stay home because that’s where the best pity parties are!
i finally meet some royalty. . . and some heavy metal coming up! »