i hope my mom accepts my friendship request

i thought about my two moms yesterday.  it’s near christmas.  i worry about whether i’m a good mom to my boys.  i watched an episode of modern family.  i get a little sentimental.

so i checked.  yes, my mom is on facebook.  my biological mom.

this picture was probably taken around the time my mother and i had contact with each other. she would have been about my age. now she would be in her early seventies

my biological mom aleta and her then-husband my biological father justin put me up for adoption just before i turned three years old.  i was adopted by the patrick family.  the patricks were told by the adoption agency caseworker that it was best to change my name (from arlynn to lynn) and to try to erase all memories of my relationship with my biological parents.  when i finally went to live with the patricks i wasn’t allowed to take my clothes or even my favorite stuffed kitten.  i obviously knew i had been adopted but nothing else beyond that bare fact.  in fact, when i saw my birth certificate for the first time,  i was startled to realize that the state of illinois had switched the names of my parents.

these days people are more inclined to use “open” adoption or to give the child a sense of whatever heritage or history there is.

mrs. patrick was over forty when i came into the patrick family.

i left the patricks when i was just shy of fifteen and entered into the illinois foster system.  ultimately i went to college and law school.  after law school, i hired a private investigator to locate my biological parents.  it took him roughly a month to find my father justin (who is my facebook friend) and it took him roughly another month to locate my mother because she had remarried and divorced a second time, retaining her second husband’s last name.

after a few years, i lost track of my mom aleta.  i’ve tried phone books, google searches, directory assistance a few times over the years but she has seemed lost to me forever.  this morning, it took me less than twenty seconds to find her on facebook.  i’ve sent a friendship request.  we’ll see what happens.  so far she has “ignored” the request.

yesterday, i also got a chance to get a “two-fer” on my facebook new year’s resolution.  i am friends with liza roche who works for the sun-times media group.  i first met her at the winnetka rotary club. 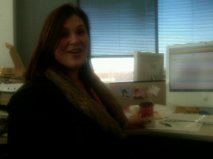 f2fb friend #277 has three stories and lots of cubicles inside.

i saw both friends at the pioneer press offices.  in the days before the internet, a newspaper often had a “bullpen” of reporters working together.  these days,  a reporter might work from home or from the table next to you at starbucks or caribou coffee.

This entry was posted on Tuesday, December 13th, 2011 at 3:10 pm and tagged with adoption, adoption agency, biological father, biological mom, biological parents, f2fb, facebook, friendship requests, mothers, open adoption, winnetka talk and posted in Uncategorized. You can follow any responses to this entry through the RSS 2.0 feed.
« being a minority on the most segregated day of the week
raven of the northwest on my last big trip of the f2fb year! »

3 responses to “i hope my mom accepts my friendship request”