are you crazy? you’re going to get yourself killed out there!

just a few hours before the beginning of the year 2011, i took a look at my facebook friends list and said “gee, who ARE all these people?  and when was the last time i saw any of them?”  i made a resolution to meet and spend time with each and every friend–all 325 of them–before the end of the year.  it was quite a year.

but something i heard over and over from people was “are you crazy?  you’re going to get yourself killed!”

catherine barnes, 32, of ohio traveled by herself to wales to meet some facebook friends for the first time. she disappeared in january and her frantic family spent many a night believing she might met an awful fate. the swansea police located her in february. what a relief!

whenever i met a facebook friend, if it was for the first time, i always made sure i had a chaperone or that i was in a public place.  i NEVER met someone in my home or in their home.  only one time was there an exception. . . . 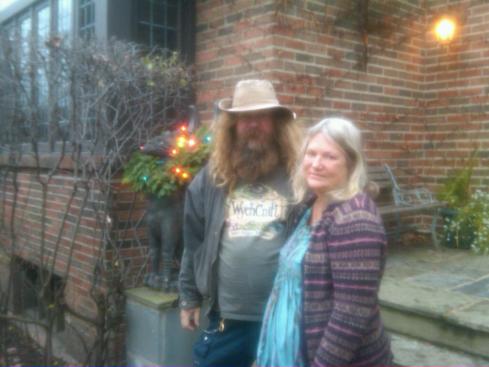 one facebook friend, who was mutual friends with a girlfriend of mine, kept insisting that we should meet at my house and that he would be such a gentleman as to bring a bottle of wine. for a full year we went back and forth on this issue, and i would always decline. or we would make arrangements to meet in a public place and he would cancel at the last minute. finally, one day i relented and said "sure, come on over" he was on his way! and when he called to say he was ten minutes away, i reminded him that i had houseguests--pictured here--zeeb and beth feywood. the facebook friend never showed up. he's part of the ten percent i never got to meet!

so i wasn’t completely surprised by the news that the brooklyn orthodox jewish girls school beth rivkah asks its students to not use facebook.  students who are discovered to have facebook accounts are ordered to delete them and pay a one hundred dollar fine. a firestorm of publicity has ensued in the past few weeks because several girls have been kicked out of the school for not adhering to the rule.

“girls are getting killed on the internet,”  school administrator benzion stock told the new york post.  “that’s the reason for it.”

he also added that facebook “is not a modest thing to do”, claiming the internet ruins marriages and families.  i agree.  girls are getting killed by people that they meet on the internet in unsafe situations.  some marriages and families are destroyed by affairs that are begun as simple facebook friendships.  but by that logic, we need to immediately get rid of other forms of communication, starting with . . .

the post office? telegraph? carrier pigeons? semaphores? what are we thinking about??? any of these things could be dangerous for marriages, families, our very lives because they foster communication!

maybe instead, people need to set up safeguards for themselves.  which brings me to f2fb friend #309, the not at all dangerous martin ruffner.  ruffner is a gentleman and, as such, it wouldn’t even dawn on him to ask me to meet him outside of a public place.  in this case, libertyville’s jamaican hawaiian irish english restaurant firkin’s, for lunch.  we arrived separately.  we enjoyed a meal together and we talked about our children.

i have two sons and so does martin. he has been following my blog and my story in part because he identifies. . . he has been through a rough patch but he has found comfort and strength in his family and friends--some of whom are on facebook!

during last year, i was grateful to the many chaperones who made the trips possible!  now i am on my way out the door to visit with facebook friends for whom i feel honored to pay it forward!

This entry was posted on Thursday, March 29th, 2012 at 5:27 pm and tagged with beth rivkah high school, facebook, firkin's, friendship, katherine barnes, libertyville, meeting friends for the first time, meeting strangers and posted in Uncategorized. You can follow any responses to this entry through the RSS 2.0 feed.
« a face to facebook invitation!
who doesn’t get motivated by a new dress? »

9 responses to “are you crazy? you’re going to get yourself killed out there!”