on love, change, and that pesky habit of falling in love with someone and then wanting to change them. . .

facebook makes it possible to meet new friends we never would have expected to enjoy and f2fb friend #313 sara kolorowicz is definitely someone i wouldn’t have met without the help of facebook.  in part, it’s because she simply does not leave the house she shares with her parents.  without a job or school because of her agoraphobia, she survives on social security disability payments. 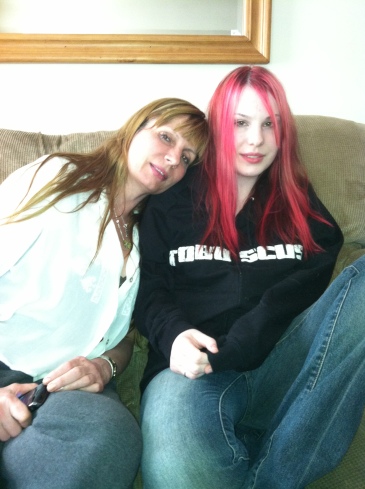 i also probably wouldn't get to meet her without facebook because frankly, sara is cool. she is what i wish i had been when i was twenty two--beautiful, honest, forthright and smart as hell. maybe if i dye my hair pink i have a shot at being a cool fifty one year old.

i felt honored that she invited me into her house.  it’s been quite some time since she’s allowed visitors.  oddly enough, she was engaged to a man from texas when we friended each other on facebook at the beginning of the year.  they met playing an online video game and their friendship turned to romance and from romance to an engagement.  he drove up ten times from texas, a twenty four hour marathon drivefest.  at first he was totally okay with sara’s life but then his desire to change her became more than the spirit of wanting the best for someone you love.   and that gets to be tricky–the line between wanting the best for someone you love and thinking that they have to change in order to be with you.

i like sara just the way she is.  i also hope one day she will be able to get out of her house, in part so that others can see how beautiful she is!  on the other hand, i have also introduced her via facebook to a video game designer.  . . that’s a job she can do from inside her castle walls!

This entry was posted on Sunday, April 8th, 2012 at 10:19 pm and posted in Uncategorized. You can follow any responses to this entry through the RSS 2.0 feed.
« a facebook matchmaker experience-a return to detroit
the tax code explained just in time for april 15 »

5 responses to “on love, change, and that pesky habit of falling in love with someone and then wanting to change them. . .”