mapquest said it was going to take me four hours and forty seven minutes to get to f2fb friend #317 if i walked and i just couldn’t believe that a city could be that big.   i also couldn’t believe that the funny, witty, supportive, beautiful facebook friend michele piersiak was housebound.  i figured she’d meet me at the ferry station in staten island.  or that she’d catch me at one of the places downtown.

i was wrong.  well, i wasn’t wrong about her being funny, witty, supportive, and beautiful.  that was definitely the woman who answered the door of the house near forest avenue.  but she is (was) housebound.  for about a year and a half her world consists of reading, the treadmill, dvd’s,  the computer that sits next to the couch in the living room, caring for her pets and keeping a house for her and her boyfriend. 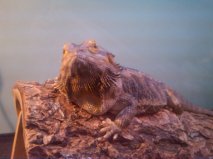 stewie is a caped dragon lizard. she may be very lovely to other caped dragons, but i didn’t find her all that attractive. in fact, i got sort of nervous when michele took her out of the cage. after all, who’s to say that caped dragon lizards want a little fifty one year old human flesh after a regular diet of crickets?

michele can sometimes leave the house for brief periods with her “safe” people–her boyfriend, her parents, her sister.  but by herself, she doesn’t even try to check the mail on the curb.  it’s been this way for a few years but was exacerbated when she lost her job.  i’ve noticed a lot of my agoraphobe friends have a major shift inward when there’s a job loss.  and with eight percent official unemployment, i think there’s a hidden group of people that is affected.

michele wakes up every day mad at herself and sad that she is in this condition.  the couch is starting to feel old.  even playing xbox is feeling pretty old.  for me, since i’ve never done it, i thought it was a kick!

this is not wasted time. well, it’s wasting time for me to be bowling on xbox (and nobody should have to witness me trying to play golf!).  but it isn’t a wasted year for michele to have been housebound for a year and some months.  every day has increased her understanding and sympathy for those who are afflicted with panic attacks, agoraphobia, post traumatic stress disorder, ms, etc.  she has a major goal of someday being someone who helps those people.  i think she definitely has something to offer the world in that respect.  she already has helped–for instance, she set up a group of ten people from around the country who set a goal of walking around the block.  at a prearranged time, everybody got on a conference call with their cell phones and walked around their respective blocks together!  isn’t that an amazing use of technology and an amazing creative idea?

she also has a minor goal.  and it’s something tantalizingly out of reach and will require her to do some work.  some planning.  some practicing.  and it will need YOU!  but i’ll get there. 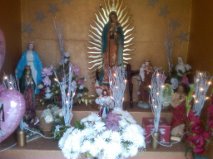 i was insanely honored that michele let me be a “safe” person for the day. we walked to her boyfriend’s place of employment (man, he was a little freaked out by that!) and then we pushed the boundaries a little further. we saw a house that had a three foot wide, five foot tall shrine out front. i like it when people of all faiths feel good about presenting their beliefs to the world!

so the minor goal, an interim goal if you will, is that michele would like to dine at the robert de niro restaurant laconda verde at 377 greenwich street in new york.  it would require driving to the staten island ferry, taking the ferry into the city, a cab or bus ride, then being in the restaurant and actually staying long enough to eat and then to return home.  to michele it seems out of reach.  but the day after i left staten island, she went on several walks with her parents and her sister, pushing herself a little more than usual, to get a few blocks outside of the “safe” zone.  she has made a deal with me that if i return to new york she will go with me to the restaurant. 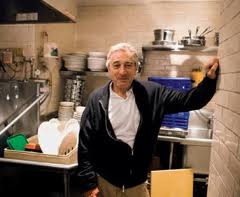 mr. de niro, i’m betting the prices at your restaurant are a bit dear. but i’m sure if you’re half as good at cooking as you are at acting, the food’s great! michele probably would also like just to shake your hand. to meet you and say “thank you for motivating me to change myself!”

so this is where YOU come in.  if you know mr. de niro or if you know someone in the restaurant industry, if you know someone in new york, i think a gift certificate to laconda or a menu from the place, a message from de niro — even just an autographed picture — would do the world at motivating michele.  and once she achieves the minor goal, she will know that the major one is, okay, just a little harder but perfectly doable.  and that’s the one that helps everybody!

so i’m happy to hear from YOU about whatever you come up with for ideas or inspiration or maybe mr. de niro, if you’re reading this blog???

This entry was posted on Friday, May 11th, 2012 at 2:38 pm and tagged with agoraphobia, agoraphobia and unemployment, anxiety attacks, caped dragons, facebook, friendship, locando verde, robert de niro, safe people, safe place, staten island and posted in Uncategorized. You can follow any responses to this entry through the RSS 2.0 feed.
« You’re Richer Than You Think
girls! girls! girls! a brooklyn-ish strip club! »