last year, i very briefly visited austria.  when i say brief, i mean four hours.  a layover in between success and certain disaster.  in my around the world trip to visit all my facebook friends i had put a lot of effort into meeting claudia klose in dortmund, germany.  i wasn’t quite sure how we knew each other.  we had two mutual friends in common–both of whom had worked with my son eastman during his very brief movie career.  i assumed claudia was a producer, makeup person, lighting director. ..  and that i just couldn’t connect face and name.

claudia and i exchanged a bunch of messages about my trip.  she was very reluctant to see me and said she didn’t like meeting new people.  especially since she said her english was very poor.  i admire people who can say that their english isn’t very good because whatever language they speak i can’t say more than “hello” “goodbye” and “where is the bathroom?”  and i can only do all three in french after two years of high school french.

nonetheless, i won her over and she agreed to meet me.  and with a precision that confirmed my sense that germans are way more organized than the rest of us, it was to be at the dortmund train station hb 7 gate tuesday november 1 at 6:30 p.m.  we agreed we would have coffee and engage in the universal activity of female friendship–shopping.

on the thirty first–the first halloween i had spent outside of the country–i was in italy visiting a facebook friend and i decided to reconfirm.  oh, let’s not call it reconfirming.  let’s call it what it was–re-re-re-re-confirming.  we had just been in touch not a week before.

i tried to send her a message and discovered i was not only defriended but blocked.  and she had defriended our two mutual friends.  i was stunned.  i wanted to change course.  get out of going to dortmund.  but changing flights, hotels, the itinerary was to expensive to change.  if i was going to meet the next friend on my trip, i had to take a train to the rome airport, fly to vienna, fly to dusseldorf and take a train into dortmund so that the next day i could fly into luten, england to meet the next friend on my facebook friendship itinerary.

i had a wonderful time in dortmund.  got laundry done.  drank beer.  saw the christmas tree (man, the germans get it going on about christmas earlier than anybody–maybe they need a stopgap holiday like halloween or thanksgiving!)

maybe it was great to just chill out.  but i thought about how i approached my new year’s resolution to meet all my facebook friends.  there were some who just didn’t want to meet me.  who wanted to keep things online.

i think it’s important for friendship to sometimes be extended beyond the virtual.  and there’s another friend of mine, from austria, who agrees with me.  andrea warmuth wrote to me with this:

I´m impressed by Arlynn´s story, so I want to tell you mine.

I´m no agoraphobic, but Arlynn is an inpiring example for me too!!!!

As she visited all of her FB-friends, I managed to visit 2 of them.
Regina Jauk and Edith Garcia Chacon.
Regina I would call my soulsister and I visited her october 2011 in Sollenau, Lower Austria
and I visited Edith this June in Kassel, Germany!

Both of them are one of sweetest and nicest persons I´ve ever met!
I´m very lucky to say that I was very welcome and always felt like home!
I´m planing to visit more of my FB-friends and hope to know them all in real life!

This is my story and I was glad to share it with you. 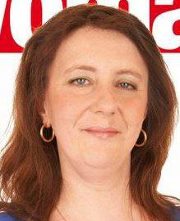 we became friends in january of this year when andrea reached out to me after hearing about my facebook adventure. maybe you can’t see every facebook friend this year, but what if you made a commitment to see two or five or ten? i really hope to make it to austria for more than the four hours i was in the airport waiting to go to dortmund because i would like to meet andrea!

andrea has 817 friends to meet and that’s a daunting task.  i have a similarly daunting task of figuring out how to get to new york tomorrow because i am re-connecting with a facebook friend i met earlier this year.  michele persiak is an agoraphobic who lives on staten island outside of new york city.  she wants to broaden her horizons and she will. . . and i’ll be there to witness it!

This entry was posted on Tuesday, August 7th, 2012 at 2:13 am and tagged with austria, defriending, dortmund, face to face, facebook, friendship, germany, meeting friends and posted in Uncategorized. You can follow any responses to this entry through the RSS 2.0 feed.
« pets, businesses, duplicates, spambots, fakes. . . sure, but they’re my friends!
i am (briefly) living the supermodel life in new york! »