what happens in vegas, goes EVERYWHERE!

loved the fact that you had fun in vegas.  a trip there with the friends before returning to afghanistan?  all on it.  naked billiards?  well, i wouldn’t do it because my naked flesh would alarm all participants, but i’m fifty two.  you’re young and gorgeous and i happen to know that for a fact because i’ve seen the pictures.

just before my facebook friend reggie (on the left) was deployed to afghanistan — after two tours in iraq — i went with him and vince p. (on the right) to vegas. i will only admit to losing money at the black jack tables and reading an uplifting book in bed by my lonesome by ten every night. i’m sure reggie and vince read uplifting tomes as well.

maybe your youth can explain the terrific naivete in believing the oft repeated truism that what happens in vegas stays in vegas.  but please, h., that’s just a saying.

the pictures have even been published in the sun! but there’s some good news. . . .

h, it’s been a rough week–your girlfriend chelsy has broke up with you, your grandmother is all in a snit, they’ve made you and your cohorts take down your facebook accounts–that was such a cute code name spike wells!

on the other hand, you received a ten million dollar offer to headline a vegas show and you’re so adorable that you’ve got close to 20,000 “likes” on a facebook page devoted to giving you a royal salute: 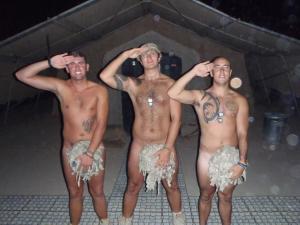 in any event, h., i really mean to say, do what you want in vegas as long as it’s consensual and everybody turns in their cell phones before the party gets started.  i appreciate your service in afghanistan and the fact that you’ve never shirked your duties.  and if it weren’t for the minor vagaries of cellulite and gravity, i’d salute you myself!